Prague is nice! We had a full day planned – churches, a monastery, two castles, John Lennon’s wall, the dancing house, and the old Jewish ghetto. Our only time constraints were football related.

We swung back around to the churches that were closed the day before. The churches are all somehow similar in Europe. One church in Prague has a famous statute of the baby Jesus. It’s said that thousands come and pray to this statue daily. Nasko and I went to try and find it and failed, for a while. What we had read online didn’t mention it was only like a foot tall and was basically a doll. But, I finally spotted him because a group of tourist start bowing to this doll. The church also had a museum full of the little dresses they put on the doll. It was a little strange if you ask me.

In other news, the hikes to the castles were okay. Nasko and I are dramatic people and on day 19 when we see a seemly never-ending staircase it’s like a competition of who can be more dramatic about it. But of course we always make it and we secretly love it. The views from the high places in Prague are beautiful – the river, the castles, the church steeples, the monuments, the gates perfectly framing the Charles bridge! We also witnessed the changing of the guard today at Prague Castle. It was complete with music, costumes and a homeless protester screaming the whole time.

One thing in particular – the old Jewish ghetto – was interesting! Unfortunately, all of the attractions – synagogues, cemeteries, and museums – are expensive. But the quarter itself was nice – tall beautiful buildings, old synagogs and kosher food. Of course, in Europe it’s hard to travel and not talk about World War 2. Prague was surprisingly well maintained throughout the war, especially this Jewish quarter. It is said that Hitler actually wanted to turn the historic Jewish ghetto into a living museum. His plan was to cage in Jews so the world could watch them live from the outside like a zoo. That’s the reason this Jewish ghetto in particular is so well preserved. Again, my imagination ran wild walking through that part of the city. It’s crazy to think about.

Another fun fact, the famous dancing house of Prague was created by a Canadian architect. It’s a beautiful but modern building that resembles a couple dancing. People say the windows give the effect that the building is moving; but it looked pretty solid to me. Maybe I’m not creative enough to appreciate the artistic value. Anyways, near the place where this building stands is one of the few places that was bombed during WW2. It was actually bombed by the Americans on accident. The pilots, when flying overhead, saw Prague and thought it was Dresden which is just 100km father. Whoops. 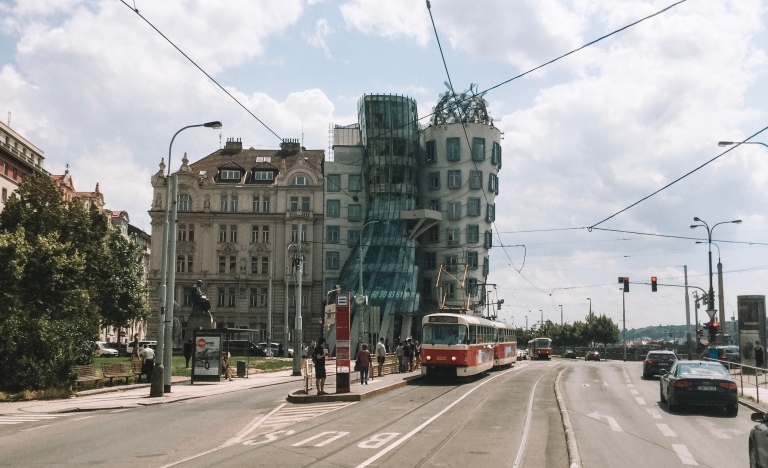 All in all, it was a great day! We’ve have absolutely perfect weather the whole trip. And there are always just so many cool things to see. But it’s almost impossible to keep up with all the history. Of course, we also watched a lot of football and ate a lot of food. Traveling life rocks!